Yesterday I painted, based and finished the Tale of the month May.
5 normal Assault Marines + Lemartes, Guardian of the Lost (Nurgle Angel Version).
He follows and guides my Death company! The 5 marines are from 2 different Squads. The difference in the squad markings will be on the shoulderpads and some will have a chaos icon on the right or left one. And it the 3 blood drops in blue or green color.

So its monday and the new prices are up. The thing that shocked me the most is:
the vinidcator, whirlwind + predator up tot 39euros! On the Chaos Space marine, Normal Space marine + Tyranids battleforce it is an extra 10euro makes them 90euro! And the Blood Angels is still 80euro? Any explination? The one for the Tau is up 95euro!

Land Raider + Stormraven are now 52euros. So 2 euro more. Kinda not a big deal. Not for me, I do feel the pain of the australian people... What does this mean again for me?
Well I'm not gonna  use a predator, vindicator of Whirlwind in my army. Or! Only if black templars/ chaos space marine get a special one! Razorbacks, Rhino's and Baal Predator are having more chance to get in my army.

Finecast:
If read some nice stuff about it. Seen a lot of pics the last hours. And it looks nice  to be honest.
Maybe gonna pick up a model or order a small one. I will see.
So yeah does this scar me to buy one? It kinda does! But if I have such a model. I will just contact GW for a replacement model! Astorath The Grim is all so long on my wanted list! But so is Logan Grimnar. Most likely it wil lbe Astorath The Grim (if my LGS has him in finecast). Tonight I have to fix my bases and my Count As Lemartes!
Gepost door Teku op 04:57 2 opmerkingen:

So I built my priest and also got my Red Proto Drake on my World of Warcraft Tauren shaman! Getiktei
Less words more pics:

On my Draenei mage I did a quest how had the same name as my blog!

Wolf Wing? Deathwing? Grey Knights? A count as Deathwing/Wolfwing/Grey Knights?
Space Wolves can thanks too Logan Grimnar you can get Wolf Guard as Troops and they can equip Terminator armor! Aka a terminator Army. Belial grants the same thing to the Dark Angels.
Grey Knights can get Terminators as troop choice also. Or you can create an army that use the rules of one of the above armies.  A few points about the 3 armies: 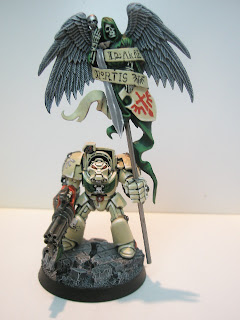 Which to pick?
Grey knights? Wolf Wing or Deathwing? The one that fits you the most!
Do you like angels who are on search to clear there name? Or Vikings in Space Marine Armour who can strike from drop pods? Or!? Psykers who can dual wield 2 swords and still shoot at you? And who can shoot psyhic power also? Or a count as army? Such as Khrone Wolves? Choice is all up to you!

So what will be my army after my 1750pts Nurgle angels? A few more marines for my Black Templars or maybe a few Nurgle Angel Dreadnought? Death Company Land Raider? Kinda have no idea. Will see in Octobor. Now I have enough marines order and stuff laying around to built myself a good "Descent Of Angels" army. 2rhino's extra from the battleforce. These will be used in my Chaos Marine List. And maybe in a variant of my Nurgle Angels. Gonna built them up till around 2500points maybe. With magnets this will be easy.

What about my Dark Eldar? I don't know! I have a 1000pts list up. Which looks fun to play. But with the price increase I will be more likely gonna think more battleforce and more marine. Because I like them the most of the 40k universe. I've also started built a Space Wolve figure and maybe that will be a kill team list? Will see! In Chaos Marine List I could included the Khorne Wolves from Dornian Heresy. Hmm so much choices!


But what with my loyal Black Templars? Would It be wise to update them up? The FAQ is cool but they yeah... with maybe a codex release in january? Think I'm gonna wait a few months. To be more sure about the rumours. I have my work with the Nurgle Angels.
A box of Grey Knight also awaits build proces. So does a Terminator Chaplian, my entire Space Hulk, Kharn, Typhus and Lelith await painting! 5 horsemen of Abaddon is an idea I would like to built. All 4 chaos gods + Undivided on a daemonic mount.
Deer god I need more time! Or just vacation!
Future Armies:
- Nurgle Angels
- Space/Khorne Wolves Egg gang

Games Workshop what are you doing?

Most people have read the stuff about Price increase on the resin models. The change from metal to resin... Maelstorm Games no longer possible to sent outside of Europe. So i'm wonder what are they up to?

So we are getting resin? And have to pay up more for the same model!? It is resin and not metal!? Do they even think about the kids there health? Imagine a 10year old cutting and slicing in a resin model. Result => got some dust in his lung. And healthcare then?
Also there "New Rumor Control Policy" This Would mean only one month before Games Workshop release a codex? Models? Or one week notice. I was thinking "What The F***K?"
I do like this hobby alot! But where they are going to I don't know if I can support this...
The 3 month mail before the codex was out, was great so you could begin thinking about new conversions and stuff. Now this  would mean. "Ooh damn! I just bought a box of old marines. While the new ones are much cooler?!"

I only have one thing to add this post.

So with the purchase of a Warriors Of Chaos box for the heads I have alot of bodies laying there.
I did knew I could use them as Space Wolves Body for will a Space Wolves Army. Using this tutorial I made my first Space Wolves.

I present to you Brother Jonas. With a Close Combat Weapon and a big storm bolter. Cause he needs something big for his other loss. I gave him a mask because I like the head. Also think I will make the Egg gang, (thats the name of our group of friends we have) As Space Wolves. Because we like Viking Metal!
So thats Brother Jonas if I make whole the gang + girlfriends. It would be around 8 Space Wolves. Nice start of a Khorne Wolves!
Gepost door Teku op 13:13 1 opmerking:

Count As armies. The perfect way to use 2 or more codex for one army! They even have them in Warhammer Fantasy Battle! I remember a pic from a avatar count as army using the Wood Elves codex. But that was just fan built. Count As armies are what some people dislike and the other one love them. For example Goatboy his Space Goats!

So the above two pics show how Goatboy did his Space Wolves and Blood Angels.
How they really are:


See the diffrence?  Will I like both. I have no problem about a Count As army. Lots of folks call it heresy and not meant to be. But! Don't the space goat look cool? Of course he can use the normal Chaos / Space Marines also as codex. So in fact 4 codex for one army! That does sound fun right? But you have people who like to proxy models also. So for example you use this: 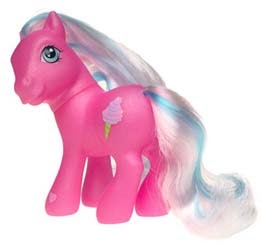 I would slap you with it instead. That isn't in no way to be used in 40k / fantasy battle. Not because it is a girl toy and it is pink. You don't want to face that. It would be okay if it was for example the Black Reach Commander to proxy it. The little pony no way...
Some people just love to convert chaos or just love to convert. That there army stands more out then others. You can do this also in a Normal Space Wolves Army but also for a Count As. And can you blame them for doing it?? No, of course not! Converting is a part of the hobby. The one I love the most. Just look at this Count As Logan Grimmar:

He looks so much more evil than the original thing. I would also make him like that much more anger show like a real space viking. As you can see he has a Khorne Icon on his terminator armor. So again this a Count As. Just like this one:

Alot of folks are doing count as armies. How many Night Lord armies don't use the Blood Angel codes? I read one guy made a Luna Wolves army using the Space Wolves codex. Even Ron from From The Warp did a Lust Wing. Which used the Death Wing rules.

Then you have other funny count as models:

The above model is from here Da Wulf Boyz . The above pic an orc on a boar. Which can be used as Wolf lord on thunderwolf mount with wolves next to him. Ok or not? Orginal it is for sure! 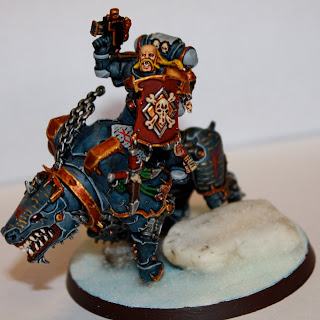 So how do you explain the above? It shows a Space Wolf on a bloodcrusher. To be used in play as a Thunderwolf. Is this a count as? It kinda is. But this is because Space Wolves didn't get any Thunderwolves yet from Games Workshop. I personally think you can just make an Count As army and keep one aspect in mind.
"Explain to your opponent if he doesn't see what the figure resembles." What You See Is What You Get! Like for example. 2hand flamers to represent one flamer. Fine by me!

For example: this is a Vanguard Marine for my Nurgle Angels. With Stormshield and Lighting Claw. It could also be close combat weapon. Like a chainsword for example.
If you explain it to you're opponent and he thinks it is fine. Enjoy the game! If a tournament thinks you're army doesn't count as a Blood Angel one. Explain them the idea and if they still don't let you play well that would just be bad luck!
No, I would be mad if they don't let you play... But I would suggest you to go and send them pics before you arrive there. This is of course if you have to register online.

I hope you enjoyed this post and understand the count as terms.
Gepost door Teku op 05:56 Geen opmerkingen:

So a friend of mine made me Nurgle Angel logo! With the blood drops and the nurgle stuff on it.

It will be used on my custom dice I will make via Chessex. How also made the dice for Heroes of Armageddon. Thinking about a red/Black for my death company ones and green/red for normal troops. With 5 each that will be enough. Also a few for my Black Templar would come in handy.
Gepost door Teku op 04:06 Geen opmerkingen:

So I was on facebook and saw the post of games workshop.
With the new Dark Eldar. Battleforce is cheaper then the other ones? Feels a bit wierd right?
Here are the new figures:

They look awesome! The Talos and just look like they are daemons. I suspect lots of daemon players converting these figures. The Venom is a fun looking small thingy. But the Scourges! Oooh boy ooh boy! They have wings! Thats like I will use them on my Nurgle Angels! Now just a release date and we are good to go!
Gepost door Teku op 02:44 3 opmerkingen:

So I used heads from Warriors of Chaos to make them look unqiue.
The back packs will be like my count as Lemartes. The bat look a like ones.
Hope you like them!

Let me introduce my squad: