Today was Insurrection 3! I had a great good time!

Lost  2 missions. Got killed. At least not all got killed! And I did a draw on the last mission. Which was quite funny! But more on that later! So the first mission was Objectives claiming and also kill the army! So I did got alot of good rules for my reserve and could place some good models in the beginning. But then he arrived with his Obliterators and also got his Emperor Childern and princes in game! So he could lash and that was my dead and failure! I did enjoy the battle and it was a fun game!
After that it was time to do the painting contest! Sadly I only got 12points on 20. Still not bad! It did get me to a high enough place!Second battle was also a fun battle! Against a Night Lord count as White Scars! That was a damn good nice list. Something I saw in Challenge 6 and I'm glad I played against it! Didn't lose that bad either. But got slapped a bit! Got 6 points from the mission and my oppentent got the maximum. So he won. My Stormraven stayed 4 turns in the game! One turn my Stormraven and 2 Land Speeders couldn't shoot one turn. Sadly but still!

The last army I played against was an shooty Tau! And I did a draw with mission points. Man did we got a few laughs! I deepstriked 2 of my units inside his Command Centre. He shooted them both down what was of course the logic thing to do. But! He shoot my Stormraven down and kill all my death company inside it. But then! My Chaplain stayed alive for 2 turns! All his shots he saved! Even with my other squad down. Then my libby did the same thing. Which was fun to do! Didn't think about that! And also got lucky with one squad of my marines. They could stay behind a smokey building and then on the my turn 5 I tried to go in his command centre. Was a fun battle! His kroot got lucky killed by me in the beginning of turn 5. Otherwise would be in problems. 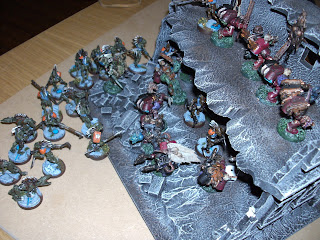