The Dornian Heresy is a great story which can be found here.
Like the name says Dorn betrays the Emperor and the rest of the normal 40k universe goes chaos or renegade. So this means Luna Wolves, Death Guard, Thousand Sons, etc are loyal. And that is pretty cool also! Thousand Sons got close combat pyshic marines. Which sound like brutal killers and an awesome elite unit! But I decided to take the Blood Angels. The Chapter dedicated themself to Nurgle. Not complete like Space Wolves do to Khorne or Raven Guard to tzeenth. The big problem they have like the story says is that they don't have much technical knowledge. Which means I have to work this also in mine army. Because the lack of technical knowledge and that there a assault force they sometimes have to make their daemon-engine.

"Before them stood Sanguinius of the Blood Angels, skin pocked and welted, and his once white-feathered wings now balding and slicked with necrotic pus."

They hide there faces behind golden masks and are allways seen in full battle armour. The perfect disguise for there plague not to be seen. But there are rumors of them drinking blood and eating the flesh of there enemies. The Apothecarion's Sanguinary Priests they didn't just transfuse there people into brethren but they where also transplanting organs who where full of toxin and decade. Sometimes the toxic get to the brains and then you get the Black Rage. Their hunger for blood is unstoppable they are a danger to friend and foe alike. They are locked away in the darkest bowels of the fleet‟s ships, only to be used in the most desperate moment of the battle.

Battlecry for the Nurgle Angels: “For blood and for Sanguinius!”

So how will I organise my army? I have to rewrite my army list again! After making this post I got new idea's how to model and paint sutff.
Units I keep for sure are => Bikers, Devastators, Death Company, Priests Chaplian.
Most likely I will add an Libby and alot more assault marines! Maybe a honour guard or land raider for my death company? Stormraven maybe? 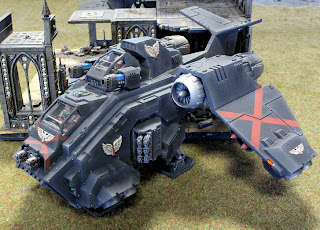 Most likey the vehicles like I sayed before will be used in other armies to. A another count as army is in the making!

This post completely unofficial and in no way endorsed by Games Workshop Limited. So does the idea of the dornian heresy belong to the people of Bolter and Chainsword.