It’s an awesome game! If only done the multiplayer so far. Got level 5 last night! Unlocked Blind Grenades. Muhahaha! Can you imagine the Chaos Raptor smashing down the ground and slashing a devastator? Did it last night! Down you go devastator!

I’m still learning to play the multiplayer. Sometimes it’s great to run as a tactical marine, the other time a devastator got the upper hand or a Assault Marine maybe? I can say that a newbie I did had lots of troubles my first few games. The last few ones did go good, and felt really good at the end. One time I was 3rd Chaos Raptor RULES! Think I’m gonna model a figure like I play in game. Chainaxe + Plasma Pistol here I come!

Still have to test the campaign itself. But will come to that soon enough.  Did try to take screenshots of my Chaos Marines and Black Templars but it will be for tonight. Didn’t found the screenshot take thingy on steam. 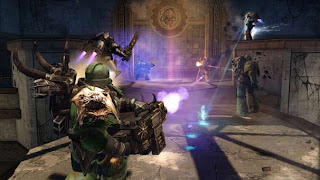 And a funny pic to end: