Well if been slacking a bit... Like a month now. Again! I can blame my work for this now... Since that there was a lot of work! Always the same things right before the company goes on a 3week holiday…. I did got some good news from my boss so... Hooray!! 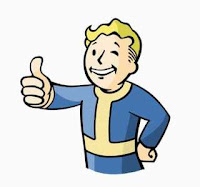 Like the title says I bought a house! A big living room, kitchen, basement (for when the future kids are bad), a garage, 3 bedrooms, and a bathroom (of course…) and a big attic for me! So that’s a big man cave! We also have a “house” in the garden. We’re going to call it "Naboo". Yes, the force is strong in this one! Went to “Grand Belgian Open 2015” on 20-21 of June. It was a great event! Not much people there only 24, but I got 10th place! Had some tight battles and some nasty ones also. But all great ones!

The next weekend it was Replays own tournament “Battle for Segmentum Pacificus II” went 16th of the 18th here… main reason is that on the first battle we were in turn 4 and It would be a win or lose for me. Why did it suddenly turn for me? Wraithguard flamers are nasty as hell!! Especially if you consolidate 1inch previous turn… did took a lot of saves but still D flamers? OUCH! Big loss here….
Round 2 I faced the centurion star with Draigo and all the fun stuff, underestimated it a lot! And I want to blame the person who rolled a 3+ for turn 6! I would have lost more that way. Big loss again…

Round 3 I can only blame myself for keeping my Star together and not leaving with one dude. So he got away and sat on the objectives. He had only a quarter of his army left…. Minor Loss here. 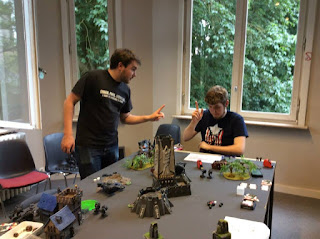 My Dark Angels – Space Wolves had enough of stuff to deal with most things. I’m not quitting on it yet. I like the list. It has punch, durability, it only needs to survive until turn 5 to be effective. Which I noticed on the “Grand Belgian Open 2015”. So I should put something extra in my list don’t know what… 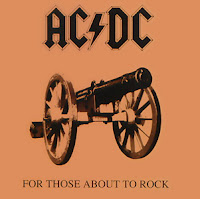 Went to AC/DC with my dad. Was pretty awesome to see those guys! Glad I saw them live, totally worth of walking around as a sleepless zombie the next day! Also been helping a mate the last couple of weekends at his house. So not much of painting to show… Been slacking with my Tale of 30K! Hopefully I can fix this in the holiday. But I doubt it, since if been playing Bioshock 2 lately I want to finish it! So curious about Bioshock Infinite! I have a lot of model ideas in my head but with the house on the horizon everything is on pause. Got a painted tournament army which I like so I’m safe with that. 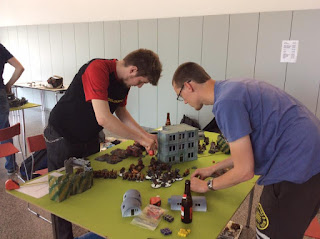 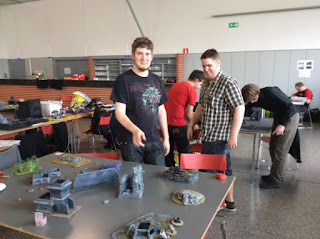 This weekend from 18th -21th July it’s the Team Belgium trainingsweekend. Time for some good memories and happy days! And in three weeks European Singles Championships! Got challenged by John from North Ireland for the first battle. Great! 8 Maulerfiends and a bunch of flesh hounds coming my way!!

Other then that some funnies to end it. (Best you have seen Jurassic World before clicking it!
http://9gag.com/gag/aynD9EM?sc=geeky