It’s been some time since I posted something. Better change that! 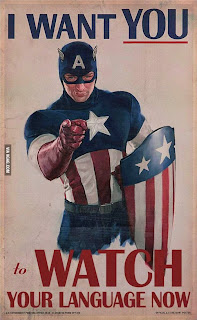 I went to the Netherlands for a tournament called "Battle of the Clubs" (Saturday 9th of May). Last year team Belgium went with 4 full max teams! That meant 20 Belgium over at Tilburg. Sadly this year only 1 team of four and one of 3 made the trip! Still we had a blast! 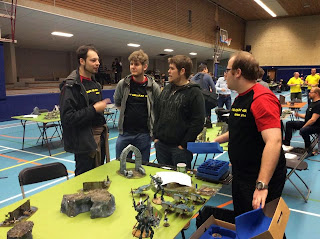 First battle I faced the mighty new Daemonkin! Damn they can do some nasty stuff. I out played him a bit with my secure objective rhino’s in the last turn. Because things where looking bad... Hooray for basic tactical marine in rhino’s! Won this one! 12-8! 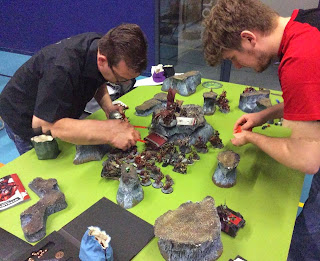 Second battle I faced off a space marine full bike army. So grav and melta guns everywhere! I knew this was going to be a bad game if I didn’t had first turn. And yeah… shit happens I didn’t get first turn so I was expecting a full scout and moved and be shot to pieces… he didn’t do that! He just killed me of slowly until turn 5. I would have done it otherwise and go for crippling me in the first turn. I lost this one with 0-20.


The third battle I went against Dennie, last year we played round two so it was fun to play each other again. I had quite some self-confidence with this battle because I could hit and run out of the combats. He had twice invisibility. So this would be hard! I got a bit cocky when I killed two units daemonettes, one had invisibility up. Should have been more down to earth…
And then suddenly I was taking armor save on my Chaplain... D'oh! Then I hit and run with my thunderstar. BUT I didn't get far enough.... With 4 dice not getting far enough from the enemy is really bad luck. So I was stuck for another combat round. He terrified my thunderwolf Calvary squad from the board. Then I was throwing high numbers with the dice! Bloody dice sometimes… game ended there so yeah… he went on tabling me because in the end he killed my big thunderstar and moved to kill my rhino’s and such. But I did get 4- 16 out of it! 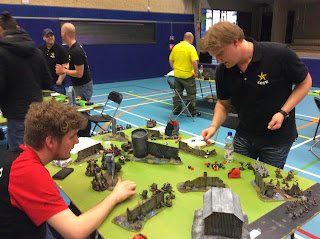 We are also looking at houses and we found one that’s really our thing. So if everything goes well… but then there is the chance we don’t have it. So exciting times ahead! I do look forward to my own room / mancave! 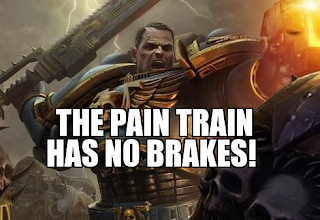 And with all the rumors of a New Space Marines codex. I’m not including them in a new. Since you don’t know what’s going to happen to the codex… so I’m preparing Dark Angels since I have a bunch of bikes laying around. Or I can go Full Space Wolves. Will see on May the 30th. 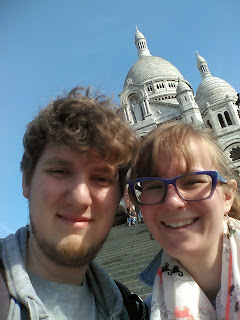 The miss and I also went on a weekend Paris for fun. Will we were the youngest couple there… I blamed the 60+ people who love to learn French. It was nonetheless saw some cool buildings, Eifel tower, louvre,… it was fun and all. But next time where not going with a bus that contains 90% old people. No offense to the elder of course! 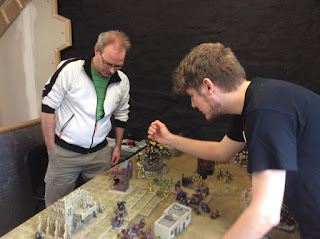 Then last Saturday 23th of May, there was an unbound in Aalst at the store Heremelijn. First battle was against a normal Eldar list. Sadly the wraithknight stomped twice a 6… so bye bye 800 points… Really! That damn wraithknight threw the game in his favor. I would have killed it next turn and had enough punch to win it! In the end I lost… total wipe out. Damn Eldar …  I will dislike them on the table…


Next up Blood Angels (1 scout squad) and a bunch of Tau with preferred enemy… really? Yep! I did seize tough and could kill one riptide. The other one I failed to charge… bleh! That squad failed to charge the same unit twice. It did make some crazy ass saves. In the end he could just shoot everything and bam done. 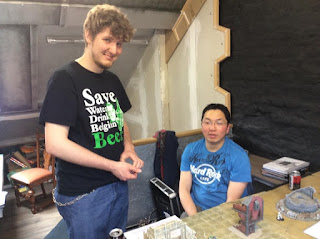 Last battle I faced Daemons and 2 Imperial Knights! So more stomps coming my way! Battle went both ways so it was out till the last dice roll. Because it littary was. Since they were come to apocalypse he had to roll everytime he came closer than 12inch from each other. So on the beginning of turn 5 his screamer star and last knight were too close to each other.  And he had to roll. So he rolled twice a one. Otherwise we could have wiped me because my last two units were sitting on objectives. I was lucky there… so it didn’t feel like a victory at all…


Started painting some models and converted my Ravenwing Command Squad! 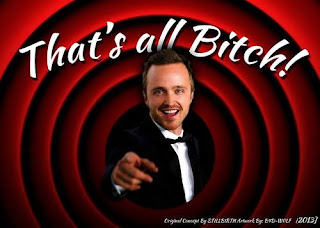