So it's been some time since is posted something.  If have been painting a little Nurgle Daemon army. For when the Chaos Daemons codex is comes out. Also went to a Double Tournament in the French area of Belgium. Belgica Hiver 2012! I went with my Chaos Space Marines and my teammate with Imperial Guard.It was a fun experience but I don't know for sure if I ever would go on a 1vs1 tournament. Since my French isn't really all that good. We had 3 great battles. First battle was against Blood Angels & Imperial Guard. This was a draw and a good and exciting battle! Next was up against Grey Knight & Dark Angels. Well they outshot us. So that was little of a bummer. We killed a Dreadknight, Coteaz, Contemptor dreadnought and some other Grey Knight / Dark Angels units.

The third and last battle was Chaos Space Marines + Chaos Daemons. A fluffly but it was a weird armylist.  Still was great to see the Flamers of Tzeentch in action. Wasn't really impressed, they died too quick. But when they did they're attack they were good. Hoping Nurgle gets also something cool in the new Codex. The Chaos Marines where easily whipped out by the Helldrake + assault from spawns and Chaos Nurgle Lord on his Bike. Overall I was really impressed by the Helldrake. Sadly most of the time he was shot out of the air. His going to see alot of play time this year!

Started painting my Nurgle Tournament Army. Only have my bikers and autocannon dudes left. Who has to come from the Forgeworld order.

If also been thinking about some Traitor Guard. Since if seen Guard in action a few times. And I like the idea of them to have joined the Nurgle Angels in a battle against the false Emperor.
I was thinking about a Commisar who rebeled  his generals and killed them and has joined the path of Khorne since then. Only thing that is a bummer: Khorne hates psykers. So that would be a Nurgle Psyker who joins them. 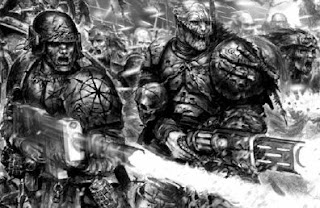