So this saturday it was The Green Knight Grand Tournament 40k! The LAST 5Th edition tournament. I came in 3rd!! of the 14 players. I fought against orks, grey knights and necrons! Well I was lucky it wasn't against real tournament lists! Still had some problems with the orcs! Damn battlewagons and there tankshock stuff! Damn nasty! And then there was the grey knight with their power weapons and  their riflemen dreads! But it both games I always keep thinking about the primary objective, second was for when I had time left.

The second mission was getting an objective to your side. Their where 3 markers in the middle! For this mission I got a big blob of assault marines with me. I charged for the objective gripped it and fly back to my side. I shot his stormraven out of the air so his paladins had to walk. He only had 2 troops with him to get the objective, lucky for me there was a lot of terrain on the board so I could block his way to the objectives for that mission. He had to get out and charge my squads, I got 4 troops with me! I killed his two 5 men squads and then had to hope their wouldn't be turn 7! I wasn't so I won primary again! Secondary was one point per squad you got  below half strength. With only my assault marines, priest and libby left he won that one.

Third mission was a win for me also, I got really lucky because he couldn't explode any of my vehicles and he rolled really bad! I felt sad for the kid, even more when I exploded his Monolith! Primary objective was to claim more corners then your opponent! And troops count as double. So I got that one. I had 3 troops in 3 corners and predators in my own which was one point. Secondary was killing the other his general. We both failed that so a draw!  I must say It was fun ending of a very very hot day and the last 5th Edition!!

Only disappointing thing was that I didn't get any price :( So their for this picture: 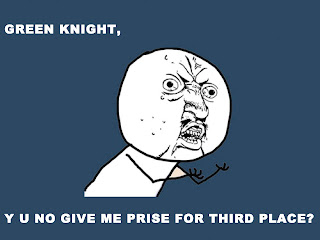