So what have I been doing the few last weeks? Alot of stuff!
It snowed and because of that I didn't get to try my sanguinary list.. I bought snowchains (which afterall I didn't needed...)
I tried some battle damage but I wasn't sure about it. So I redo the models. Now I'm gonna wait till after the tournament to try it again. Also the skulls will be after it. Only the vehicle tracks left to. Here they are! 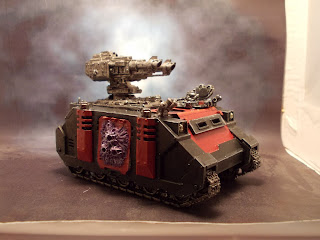 Also bought some army for half the price. So my vehicle park is again grown as is the troops and terminators. They will most likely go into the Black Templars, Chaos Wolves and Nurgle Angels armies. Looking out to do  them! But first my Black Templars. After!!! I finish my new attack bike and the sanguinary priest.
I went to the Ardennen (for guys who don't where that is. Its the French side of Belgium) 2 weekends ago. And last weekend I went and go to my local game store for a list of Razorback Spam. Was fun but I'm in doubt If I will play it like that for real. Thinking about doing a squad of 10men Assault marine in rhino and 9 death company with chaplain and an extra death company dread. I think I'm gonna see another time what I'm gonna remake of it. For a next post maybe. I faced an "in your face" space wolf army list. Was kinda "fun"! He was also test listing his list. Bjorn is a goddamn bastard to get down! Front armour 13!?? You be damn sure I'm gonna make him one day also for my list!

Ooh and my girlfriend made me an awesome valentine gift! A home made drop pod!!! Awesome! I asked her do alot more. So I can go and make a drop pod wolf guard army! The last pic is how I see myself as an Chaos Wolf Terminator.
On a side note! My weekly painting paid off! I'm ahead of shedule so after attack bike and Priest. The Sons of Dorn and the most awesome chapter ever are next to be repaint! Sadly I'm waiting for a new codex!! BLACK TEMPLARS!! PREPARE TO GET PURGED YOU FOIL WITCH!!!